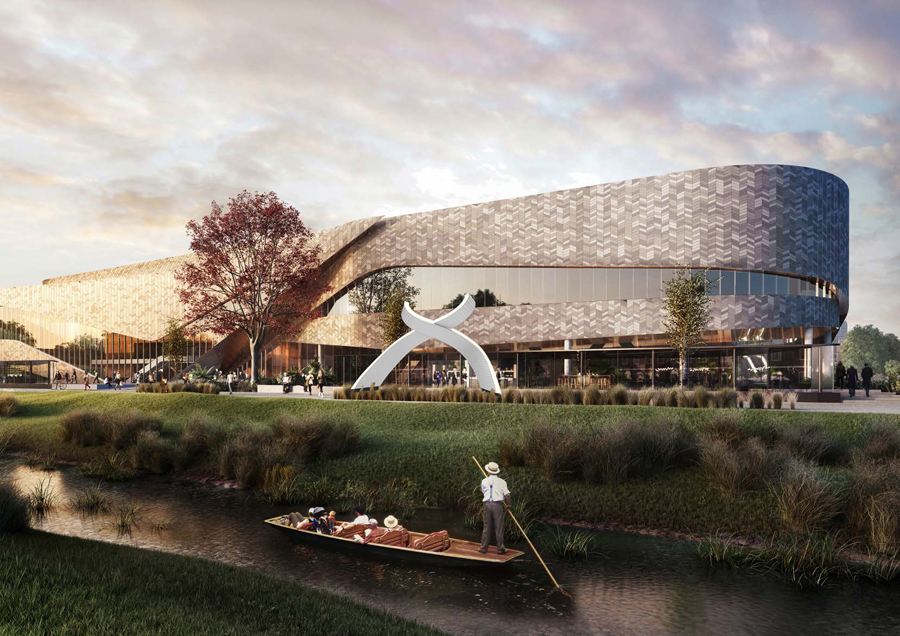 The stunning white ngutu (ceremonial entranceway), will welcome visitors to Te Pae Christchurch Convention Centre, and be the location of formal ceremonies.

Construction will begin on the aluminium artwork, named Te Aika, this month. It has been designed by artists Rachael Rakena and Simon Kaan and will be produced by SCAPE Public Art in collaboration with Matapopore.

Te Aika means ‘the home people’ (it is a Ngāi Tahu version of 'Te ahi kā': ‘the home fires burning’). The artwork recognises the mana of local hapu, Ngāi Tūāhuriri. The design has been inspired by the distinctive southern maihi (diagonal bargeboards) on whare on the bank of the Horotueka (Cam River).

Other influences include: the kōtuku, which is considered a good omen; karanga weaving imagery as a tribute to Ngāi Tūāhuriri wāhine; the kahu huruhuru or cloak as a symbol of welcome, warmth, mana and protection; and Te Ao Mārama or world of world of life and light (wisdom and understanding).

Rachael Rakena says the commission was very much a collaboration with Ngāi Tūāhuriri and their aspirations. “It was important for us as artists to ensure that the outcome reflected their mana and whakapapa of place.”

Simon Kaan says it was a great process working together through the complex project. “It has been a privilege to work on such a prominent public artwork for Ōtautahi, which we hope Ngāi Tahu whānui and the public of Aotearoa can embrace. Public artworks, if successful, have the ability to help inform a collective understanding of place and its people. That is our hope for Te Aika.”

Te Pae Christchurch Convention Centre is a major government-lead construction project in central Christchurch. It is one of the remaining rebuild 'anchor projects' and is expected to open in the second half of 2021.

Culture, Word on the street