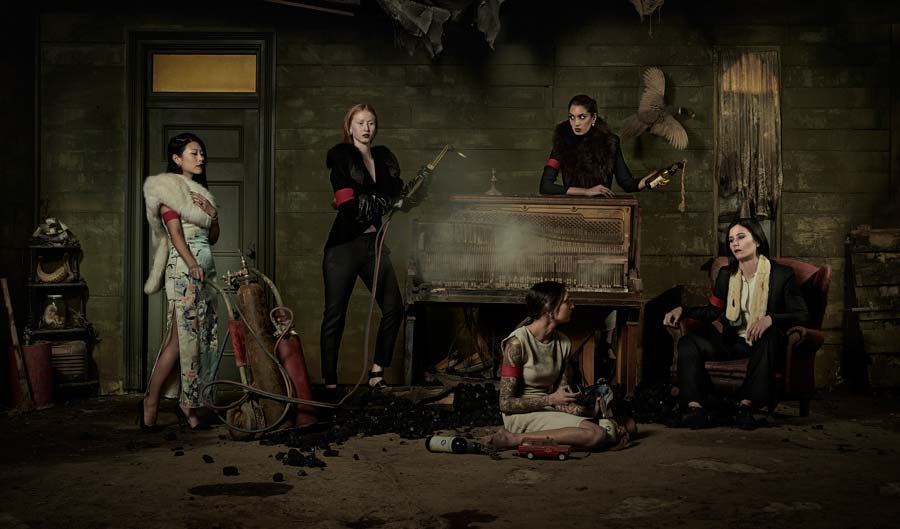 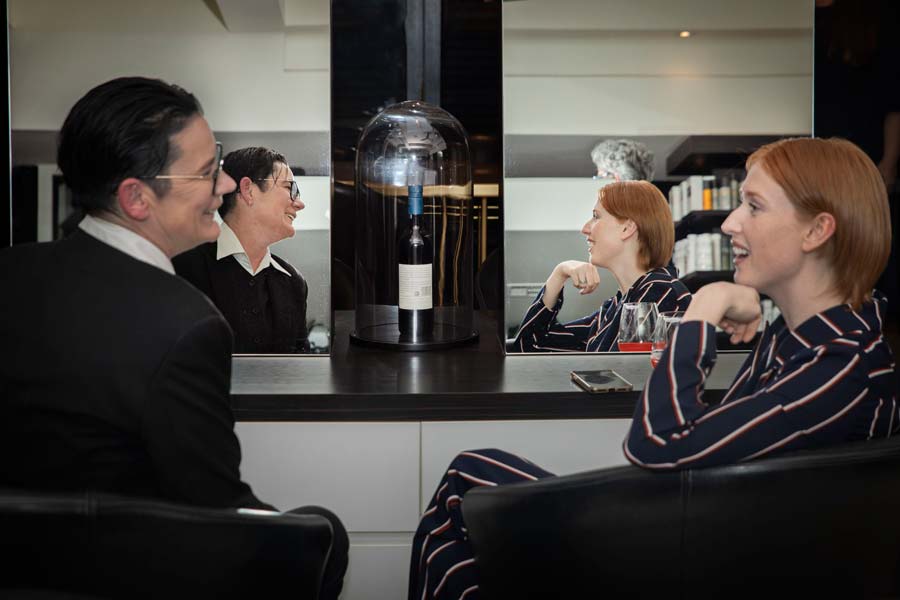 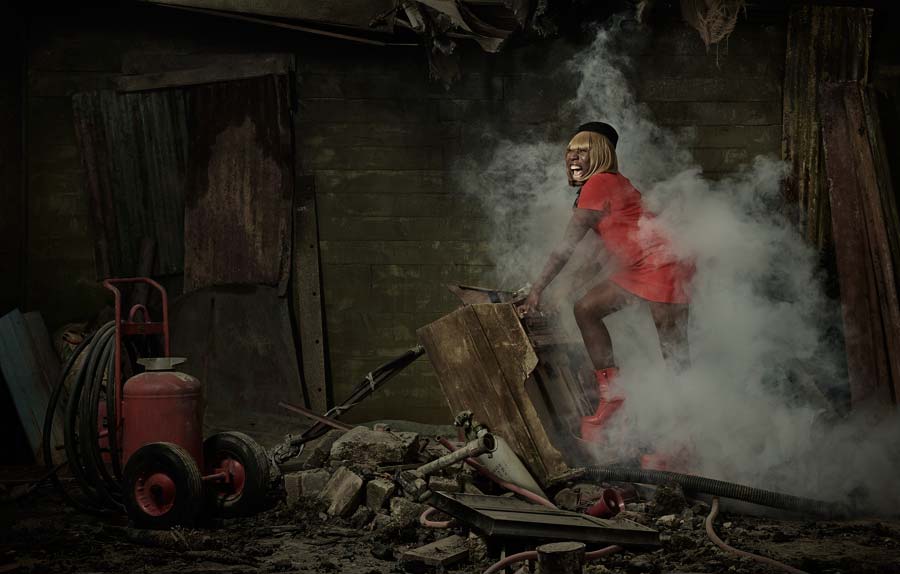 Heather Straka’s art series Dissected Parlour is not in a gallery, but rather on the walls at Mod’s Hair in Merivale, Christchurch. She talks to us about creating the exhibiton, her process, and powerful women.

You’re a deft hand with a paintbrush or sculpture, and you’re very experienced in directing as well as photography. What’s your favourite medium to create in? Ooh that’s a hard one, isn’t it? Most of the time I’m a painter but I suppose I quite like to photograph because I get to work with people. And I get to make sets and pick models and dress them up. I like the collaboration.

How do you choose your models? It’s generally quite reliant on what the idea is. The Bloodlust boys all had to look sort of Germanic, looking to go with that theme, a bit communist, and they’re all sort of typecast. With these girls it was really important to present a new New Zealand, one that’s more multicultural. Not all of my models are professional models. I quite like to get a different sort of look to what’s fashionable at the time.

So it was time for the women to have the spotlight? Of course it was originally influenced by the Me Too movement, and I also thought after the last photo shoot, where I’d done the boys with their hunting and fishing kind of thing, and that was a bit tongue in cheek… This time I kind of wanted the girls to have the armbands and the power, you know, concocting a plot.

Tell us about the costume and the clothes you chose: I wanted something feminine, but also some of the outfits were a bit androgynous as well. I wanted a female sexuality which is sort of sexy and not actually giving too much away. And I liked the period setting with a lot of furs – I like putting traditional and contemporary elements together, hence the really industrial rubber gloves that one of the models is wearing.

Furs and taxidermied animals make an appearance in a lot of your work. Is this a statement about those industries? It’s more about creating a diorama. I was brought up making them at primary school and whenever you went to a museum there always used to be these fascinating dioramas which were a sort of ‘fake realness’. They captured things in the middle of certain acts. With Bloodlust it was a little bit pointing the finger at just going and aimlessly killing things to stuff them and put them on your wall. But it’s more just emphasising the idea of recreating reality with something that’s fake.

The red armbands give a bit of a fascist vibe. Is that intentional? I think as soon as you see an armband that’s what you do think. But then it’s also the Red Cross, and then there’s also the red of communism versus democracy. I created Dissected Parlour around the time of the Hong Kong riots and that inspired me to do Molotov cocktails with the Pegasus Bay wine bottles. It’s about a power dynamic. The red was deliberate because the colours would be saturated. And the set was green so the red is like the ultimate punchline.

Several people have described some of your works as controversial. Is controversy is an inherent part of creating art? I think to provoke discussion, especially on the issues of the time, is one of the core functions of art. And where things can get in trouble is as time goes on and politics go on, work then moves out of its original context.

What inspired you to display Dissected Parlour at Mod’s Hair? I know [Mod’s owner] Julianne Liebeck from a year when we spent a lot of time together at the opening week of the Venice Biennale art exhibition. But it was actually Deborah McCormick from SCAPE Public Art who brought us together for this exhibition. It’s quite nice to get works out of the gallery. It’s nice to enjoy something, to just sit down and lounge around in a space. Because a salon’s a little bit like your lounge, you know? It’s designed to keep you comfortable for quite a few hours while you’re there, so you spend more time just looking at things than you normally would perhaps in a gallery.

What is Dissected Parlour saying about women? I just wanted to give girls the power this time. Basically, the girls are trying to change the status quo. In Teamwork (part II) they’re ripping down some of the colonial constructs and setting fire to the piano, while in Thing of the Past the boys are trying to extinguish the piano and resurrect the status quo. And of course you’ve got the gender neutral model just screaming on top of the piano. So I had a real play around with gender and stereotypes.

Can you tell us about the technical aspect of how you made these photos look so distinctive? It’s mostly done in camera with some post production. We built the set in a shed on the farm rather than having our models on a green screen. I think it gives you a different look – I quite like the slight grunginess. And we use a quite extensive amount of lights and there were also smoke machines and things like that. Things like trying to get the smoke sitting perfectly on a piano keyboard with everyone in exactly the right pose is pretty difficult, so sometimes you do one shot of the set with the smoke and one of the models and superimpose them.

The smoke is particularly striking in The Scream. Actually that was all done in one shot. We actually had the smoke machine to one side and I got the model to stand up. I said get on there and just like pretend you’re Elton John and scream.

How does Teamwork (part II) relate to Teamwork from the Bloodlust series? It’s a very similar kind of composition. A flat background, they’re around a table sort of concocting a plan, and they’ve got stuff, things everywhere. What I like to do is not say too much, leaving enough space for the viewer to think “what are they doing?” rather than actually spelling it out. I call it the ‘art hole’. Putting some symbols and content out, but allowing enough space for the viewer to insert themselves within it.

Tell us about the model dressed in your clothes holding the dog. Is it your dog too? Yes, I would have liked to get my dog Mila in Teamwork (part II) as well but have you tried to get dogs to behave themselves for a photo? Mila is not too bad but you’ve got lighting rigs, smoke machines…

What’s your favourite piece in Dissected Parlour? Probably Teamwork (part II), because that was one of the original ideas I’d percolated on for a very long time. And also Reverie, the little boy, which is very much a relevant image in Covid time: youth looking out at the crumbling world.

What artists are you interested in right now? Gregory Crewdson. He’s an amazing artist who did a lot of big photographic setups. And there’s a Russian collective called AES+F that does some amazing video works.

What don’t people know about you? I ride a dirt bike. I probably shouldn’t, because it would be really bad if I broke my arm, being a painter.

And your favourite place in New Zealand? Central Otago. You know, why wouldn’t you?

What’s on the cards for the rest of the year? I’m dreaming up my next show now. I am looking at the 1950s idea of people creating exotic themes in their own homes, at a moment when we can’t travel but we let our minds travel. We've been eagerly anticipating the release of The Black Seeds' new album, and now it's out the band are hitting the road with a good ...