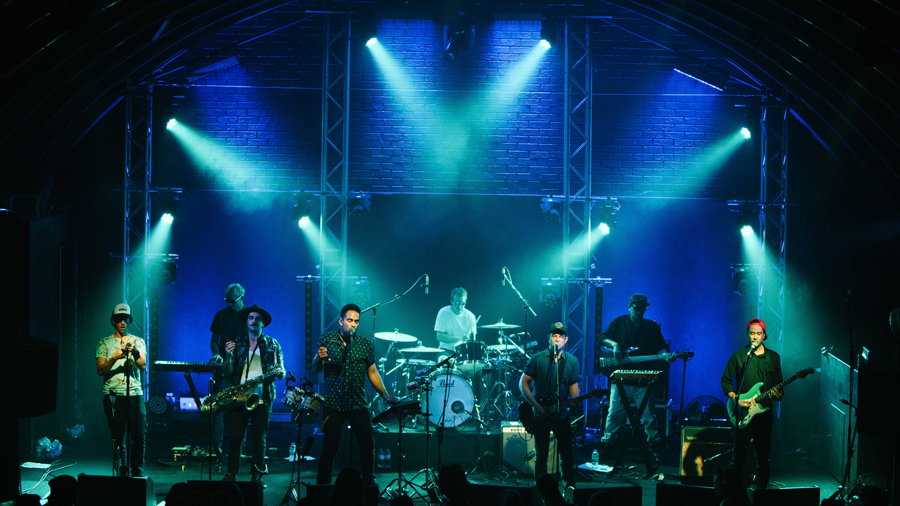 The Black Seeds live at The Triffid. Image: Stewart Munro

We've been eagerly anticipating the release of The Black Seeds' new album, and now it's out the band are hitting the road with a good old-fashioned national tour. We caught up with founding member Barnaby Weir.

Congratulations on the release of Love & Fire! What’s the feeling the band brought to this album? Thank you. It feels great to finally be able to share our little musical treasure, we've been working on it for a while. I think the general feeling the band brought to the album is one of hope. It's been tough times for a lot of people around the world and more so than the pre covid years. We've all had some kind of struggle during this time but having a sense of hope through our music and this album project helped to get us through it and brought us together creatively even though we were separated physically.

Love & Fire is dedicated to your manager Matt McLeod – tell us about his contribution to the band. Matty was there from the start. He did the hardest of yards,  managed the band from a novice party band into an album-releasing, touring entity. He brought a lot of laughs and love and a real sense of ethical strength to how we operate. He sacrificed a hell of a lot for us and chose The Black Seeds as a major long term project through thick and thin. As of recently he is no longer our manager but we wanted to acknowledge our respect for him in the dedication.

Is it hard collaborating remotely on an album with such a big band? Yes it is. It's certainly not ideal but it's better than doing nothing.

Were there any unexpected advantages to remote songwriting? The upside is you get to manage your contribution how you like and in your own space and timeline to a degree. This can mean some really great individual contributions that are born free to be absolutely original and not as controlled through the producer. I think this was fairly liberating and at the same time scary for us, but ultimately resulted in some great work.

What’s your personal songwriting process? Mine is based almost entirely around capturing a moment or moments of inspiration and getting onto it with a demo recording. Inspiration for me may come through a riff on the guitar but usually a beat and bass line, a feeling, a groove or a feeling inside. The challenge is to explain yourself through the music and lyrics, but once you have a sense of what it is you're feeling, usually the song starts to reveal itself fairly obviously and all you have to do is follow the breadcrumbs to the I don't know about the other guys.

What’s your favourite track on the new album, and why? Today it's The title track 'Love & Fire'. Simple lyric, catchy melody, killer beat and straight to the point. Bittersweet Seedpop.

Does it feel good being back on the road? Yes it feels great to be busy with The Black Seeds again. So much thought and passion and creative power has gone into this release. A lot of admin, a lot of discussion and so on. Feels good to be finally sharing and playing some of the new stuff and getting on with it. I was definitely getting sick of the same old questions, "What have you guys been up to? Are you still doing stuff? Why have you not played recently? Are you playing anytime soon?. Do you have any new material?". Seeing our fans and friends on the road and playing live is probably the best part of a fairly exhausting schedule. What you don't see is all the rehearsals and promo engagements, meetings and planning that goes on behind the scenes. All worth it when you're feeling and sounding good.

What do you do when you’re not making music? They call it parenting, haha. I am, we are, raising a family in New Plymouth. We love it here, recently moved, and a lot has happened in one year to be honest. I help with my mum's cocktail bar Poquito Bar at 11 Tory Street in Wellington, and basically hustle different music jobs and projects around The Black Seeds, Fly My Pretties, some casual DJ'ing and solo gigs. Yup, mainly music, parenting, cooking, sleeping, I think.

What music are you listening to at the moment? All Black Seeds currently for me, but hot tips for other artists, I recommend you download and turn up Pino D'Angiò 'Okay Okay', Steve Monite 'Only You', Sam Evian 'Time To Melt' and Slim Harpo 'Shake Your Hips'. PS, just buy the tracks so you always have them as a proper file forever. You wont need the internet to play them and you will feel better about yourself actually supporting an artist you like.

If you could jam with any musician, living or dead, who would it be? Today, it's Slim Harpo.

Any up-and-coming Kiwi musicians you’d like to shout out to? Big ups to Seamus Johnson and Sam Fowles, my faves The Nudge, and me old mate Aaron Tokona, RIP, nothing but love. Matariki: How to find the star cluster in the winter sky

This Friday is the first time we will celebrate the rise of Matariki as a nation with a public holiday. If you ask us, it's a perfect time to ... This August, Kiwis will be treated to a marquee line-up of the world’s best and brightest writers and thinkers, as they descend on Tāmaki ...