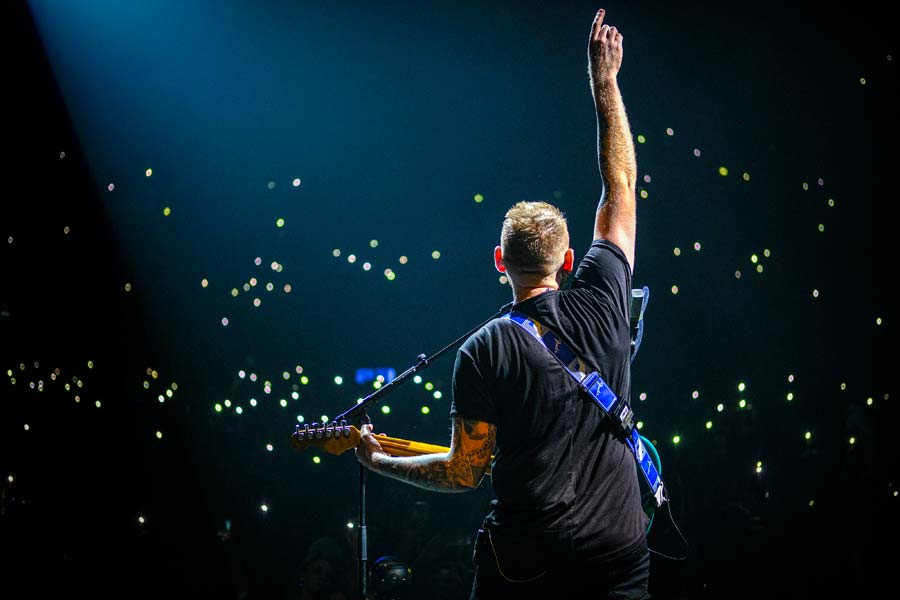 Listen-Able Band? Legs And Butts?  Joel Shadbolt from chart-topping Kiwi band L.A.B challenged us to come with an acronym. Like A Boss?

It’s been a big few years for the band with three albums and a lot of touring. What’s been a highlight moment for you? It’s been a buzz. We’re actually working on another album at the moment. Our goal was to do three albums in three years and we just seem to be keeping the ball rolling and hoping to get another one out by the end of this year. The highlights have been touring, getting over to Australia and playing some massive festivals here in New Zealand. It’s just been an incredible experience.

Is the title of the new album going to vary from the running theme or stick to the pattern? Yeah, L.A.B IV it is. Keep it consistent. No surprises.

When are we going to see L.A.B. IV? Early December. Safe to say. We’ve got strings on the album, more than we have done in the past. Mahuia [Bridgeman-Cooper], the guy who did all the string arrangements has a quartet called The Black Quartet. It’s been cool having that and experimenting with a whole ‘nother layer to the sound. There’ll be a lot of groovy funk stuff, so it’s giving that old-skool soul train kind of vibe.

You’ve got a big summer of gigs? Yeah we’ve got One Love, Northern Bass, Bay Dreams, and of course Electric Avenue in Christchurch. To me that looks like the best lineup of the summer so far.

The name L.A.B. started off as an acronym of band members’ names. With the new lineup have you come up with a new meaning for it? We’ve got an A and a B, but we don’t have an L now and we can’t change it to J.A.B. because that would just sound stupid! Yeah, it’s an acronym but we just kind of leave it. It’s a weird one, we’ve never thought about changing the name because it just stuck. But no, we’ve just kept it as it is and we just think of it as the ‘musical laboratory’ now. You can make some up if you want.

You might regret giving us that licence. People talk a lot about ‘genre’ and say L.A.B. is ‘mixed genre’. How do you describe yourselves? I’d say we’re a roots band. Obviously there’s a reggae influence in there, there’s a blues influence. There’s funk, soul, RnB, and obviously a bit of electronic as well. But it all kind of stems from some form of roots music.

Your background is playing blues in Tauranga, right? Yeah I’m Tauranga born and bred, I used to play all the jazz festivals. I’m a blues guy but I studied jazz in Auckland because it’s just such a beautiful style, understanding how harmony works and whatnot. I played in heaps of covers bands as a young fella.

Your bandmates Brad, Stu and Ara are Kiwi music legends – Kora and Katchafire have been the soundtrack to a lot of summers. What’s it like working with them? It’s awesome. It’s a laugh a minute. They’re hilarious dudes, they’re humble, talented, talk a lot of shit. And when it comes to the music side there’s such an array of flavours. Brad’s all over the place with what he likes – everything from metal to electronic to Robert Cray to blues. Stu’s one of these guys that can play anything. He’s a guitarist and a keys player. He played guitar in Heavy Metal Ninjas so he played real out-of-it shit like playing in 11/8 time and that kind of stuff – real complex metal. And then he plays reggae, like, he’s just incredible. And Ara’s bass lines are on everybody’s stereo. He’s right into his RnB and funk. I think because they’ve been around the block there’s a different attitude to the band.

Who would you love to collab with? Damn, that’s such a hard question. I’d love to do something with Tedeschi Trucks Band. Derek Trucks is a blues guitarist from the States. He’s incredible. It would be cool to sit in a room with him, and his wife Susan’s the singer.

Have you got a pre-show ritual? I definitely warm up as a singer. Gotta get out there for that first song and it has to be on. I stretch, do some vocal warmups, sing a couple of tracks, get the boys together, do some harmonies. Just kind of get in the vibe to hit that first note. Nothing worse than going out cold. Maybe the odd sneaky shot, but I usually try and wait ‘til after the show for that.

Are we going to hear any new material at your October gig in Christchurch? Nah we won’t be playing any of the fourth album. We’ll wait until it’s released and give it a bit of time. But we’ll be playing that stuff at Electric Avenue for sure.

How is it different playing at a festival versus your own concert? Sometimes you go to festivals and you’ve got to win the crowd over because they’re there to see the act after you. It’s always a real good challenge, you have to come out firing and prove why you’re there. Most bands start being the small print down the bottom playing at 2 o’clock in the afternoon to 500 people and then the headline is playing to 10,000. Festivals are great to play at but it’s a harder gig. I still love them. We’ve had some incredible moments. The last Electric Avenue we played, I think they had a deal with the university because we played real early that day and like five busloads of kids turned up. It was epic.

What’s on the cards for L.A.B. in 2021? Hopefully touring. Hopefully we can get to Australia. The goal is to get on the road. I think like a lot of artists we just want to get out there and play.

What song have you got on high rotation at the moment? A song called ‘Don’t Know What it Means’ by Tedeschi Trucks Band.

Who’s a Kiwi artist to keep an eye on? The Leers. They’re a Mount College band, from the high school I went to. They opened for us at Spark [Arena]. Man, they’ve got a cool sound.