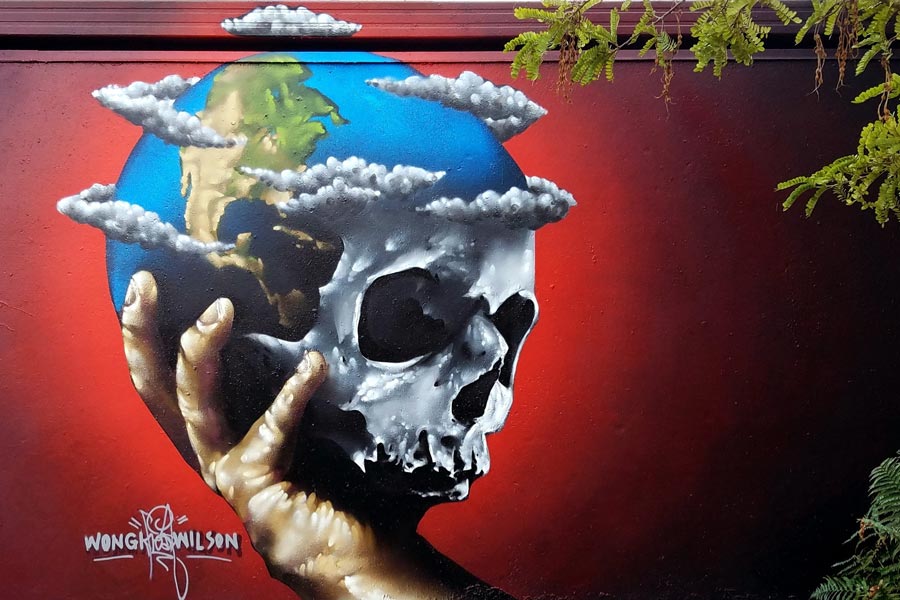 Wongi Wilson is a street artist with a reputation for high-quality, large-scale works in prominent positions around Christchurch.

What motivates your DTR street art crew? Our motivations have changed over the years but for nearly 15 years we've pushed graffiti art productions.

How did you get into creating street art? It started as an interest in the sub-culture and trying to mimic what I'd seen in magazines, documentaries and movies. Along the way there were a few opportunities to develop, namely through Project Legit but besides that, it was self-motivation.

What was the first bit of street art you created? Was it any good? It was 3D-style lettering. It isn't there anymore and no, it wasn't good.

Tell us about a piece of street art that’s inspired you. The internet wasn't what it is now, even in the mid 2000s, and magazines and books were the main source. I first saw Maclaim Crew in The Source magazine and it blew my mind to see you could use spray paint to create artworks that looked like a photo. I couldn't pick just one work but I've been hugely influenced by Tasso Maclaim and Case Maclaim.

How does your process work? Generally someone will reach out to me with a space or an idea, and I'll figure out whether it's something I can work with. From there I'll either interpret their idea or I'll come up with a concept for the space. The majority of my works are created this way but there are a couple of public walls that I've painted after finding the owner’s contacts and getting permission. It can be hard to contact an owner of a wall and once I have a good wall and contact, I'll generally repaint it every few years.

Talk us through the piece you’ve done in Christchurch that you love the most. My favourite piece is of my friend who passed away, the whole crew painted a production in his memory and I painted his portrait. It's in the city on Pilgrim Place, best viewed up close but visible from the Colombo St bridge.

Hit of creative inspiration? This is a difficult question because there's not one place I draw constant inspiration but rather different experiences inspire me, and the next that comes to mind is Armageddon where I'll be able to see art by world-class comic book artists.

What’s the best piece of advice you’ve ever been given? Eat more veggies.