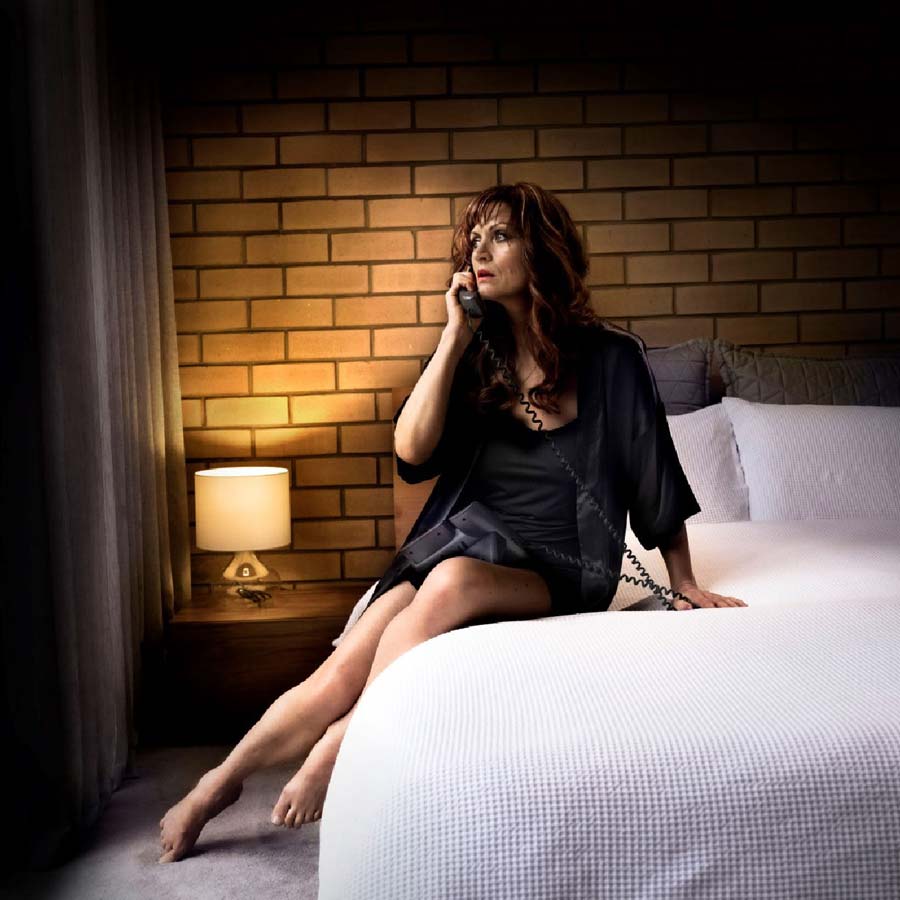 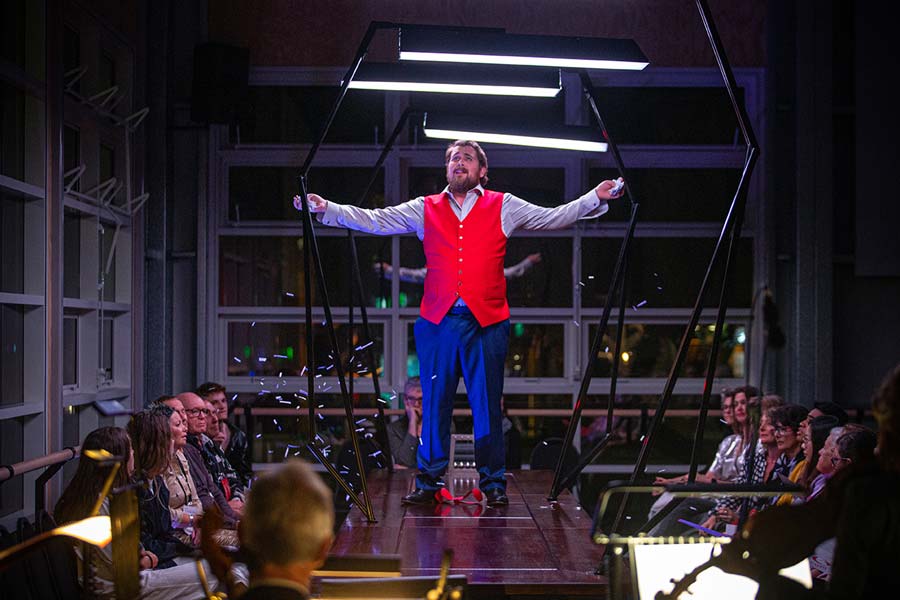 Eight Songs for a Mad King 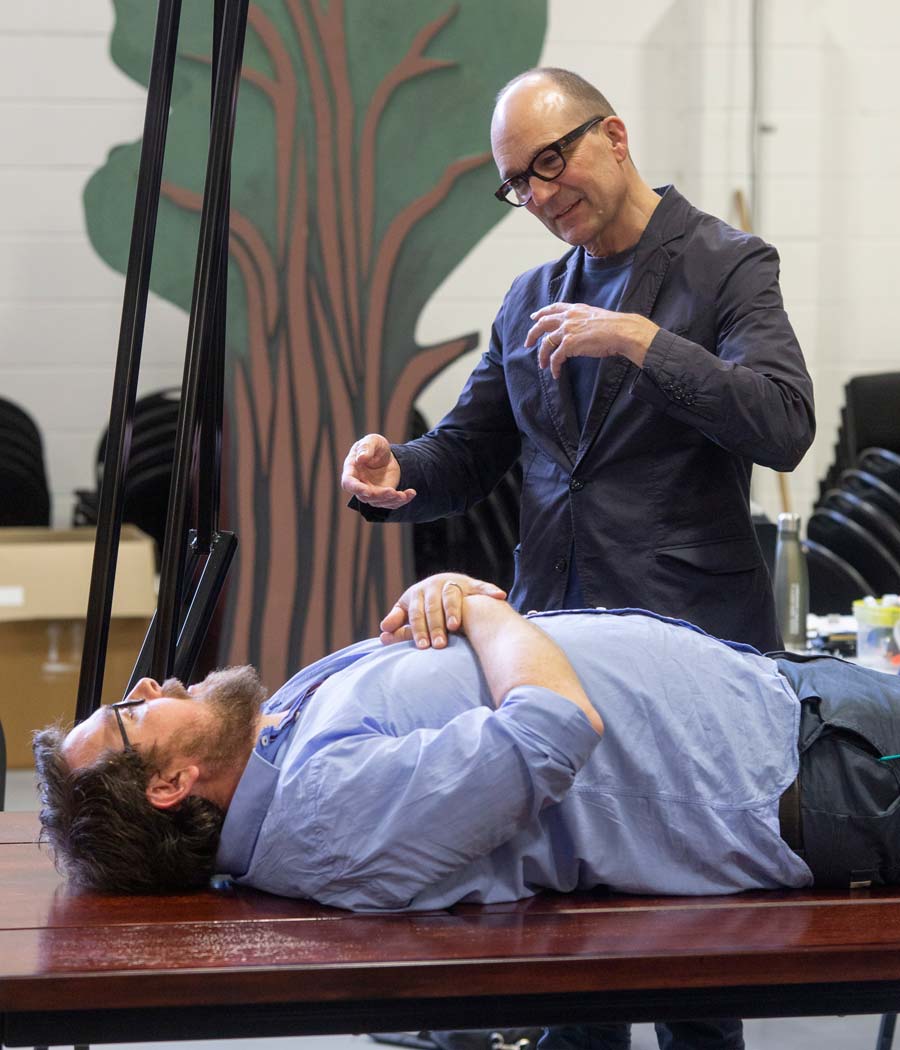 New Zealand Opera’s general director Thomas de Mallet Burgess waxes lyrical on his upcoming productions The Human Voice and Eight Songs for a Mad King, and the future of opera.

What can you tell us about the creative setting of The Human Voice? The Human Voice takes place in a hotel room, and the audience are brought into close proximity with the character, who is undergoing a profoundly emotional rollercoaster of a journey: a separation with her ex-partner. As the audience listens to that conversation, they’ll realise that she’s lying, and the ex-partner is lying. The audience are stuck in the middle trying to deduce the situation, and they’re so close they viscerally experience the unfolding emotion. The significance of the hotel room becomes clear over the course of the opera. Particularly what a lonely place a hotel room can be. These elements knead together in the performance. Using these alternative spaces is a way to give something fresh to our loyal audience, and also possibly a way of interesting a new audience that we’re keen to meet. The size and scale of The Human Voice allows us to take it to places we otherwise wouldn’t reach. It’s two shows per night, two different sopranos, one pianist, and one person who is the manager, box office operator and everything else.

And what about Eight Songs for a Mad King’s location? Eight Songs for a Mad King is a very different work again. The Human Voice was written by Francis Poulenc whose music is beautiful, heart-breakingly beautiful at times. Sir Peter Maxwell Davies is more of a bad boy. He was in his time the enfant terrible of music. The work is deeply uncomfortable for other reasons. It’s exploring the mental condition of a king, someone with a huge degree of power. The music is at times violent and aggressive, and at other times very beautiful. The audience sees the performance twice, once up close inside the Tūranga Central Library, and then at a distance from the street. Having these different experiences, they will think or feel differently about it. Not only that, but because of the public nature of the street, anyone is free to walk past and have a look. Perhaps there might be some guests from the Novotel next door who come out and find themselves in the middle of a crazy performance piece. There’s an element of happenstance. Unexpected. Unplanned. There have been huge changes in the central city in the last few years. Not just the art, but shops opening, life coming back to the city centre. I’m keen for opera to play a part in that. And if there’s nobody in the street when the performance starts, we will note that and mark that in the performance.

So it’s dynamic? Yes it’s dynamic. It’s all about dynamic. The dynamic of plans and happenstance, for one thing.

Will people who wander in be able to hear the opera? Yes, there will be speakers in the street, coming from inside the library to accompany the visuals. The experience of course is completely different. So there’s three experiences – those inside the room who are up close, those ticketed audience members in the street who have a different view and a very personal sound in their headphones, and those other onlookers who come along unplanned, and their experience is less immediate, one might say slightly duller. At the other shows in Auckland and Wellington, people started to interact in strange ways with the show. Some people walked between the audiences. Some cruised in for a bit and then left, and others sat and watched the whole thing. Some whizzed through on a bike, not conscious of what was happening. They all had very different reactions. Through the performance, the king starts to look actually more sane than some of what’s going on in the world outside.

Are there advantages to performing in a hotel room or a library boardroom over a traditional space like an auditorium? One of the concerns I have in general is that we are so bombarded with media – including music but of course all sorts of other things as well – our behaviour is becoming about blocking off, not really hearing, not really listening, not attending. I know I’ve been in the theatre and my own mind has wandered to think about what’s for dinner. How can you get the audience to attend to the work? It’s important to have a different experience. It’s important to have those theatre shows with full lighting and sound setups and it’s also important to do shows in these alternative settings.

So what’s coming up for you in the next year? I could tell you, but you know the deal, I’d have to kill you. We have some amazing things coming up. Because of the Covid-19 situation we’re having to think very carefully about how we plan. What I can tell you is the next thing for us this year is Semele at the Holy Trinity Cathedral in Auckland, so that’s another site-specific production. And we have some upcoming performances of The Marriage of Figaro, which was postponed from this year. And we’re thinking about digital media. Not simply a recording of what we’re performing live, but should we be creating work that is designed for digital from the get-go? And we have a strategic agenda. As well as our main-scale opera, regional New Zealand is very important to us so we’re thinking of ways to bring shows to smaller centres. And we want to commission more work from Māori and Pasifika artists. Developing young artists is also important.

What piqued your interest in a career in the opera? The first opera I directed was the first I listened to. After that I quickly realised that the form is endlessly fascinating and therefore likely to support a career life well lived.

The first? How did that come to be? I was starting in my career as a director. This was the 1990s in the UK and there were only really two courses in the world that taught directing. I did my research on them and wasn’t really impressed. Of course now there are thousands. But I did what I was advised to do, which was call myself a director and start directing. Someone my mother knew had an opera production and wanted a theatre director, and that’s how the introduction was made. It was Menotti’s The Medium. A bunch of us who were learning our craft got together and put on The Medium in Croydon, and it did really well, then we took it to the Edinburgh Festival Fringe. Then opportunities started to come my way in opera.

Who is your personal hero? Denis Diderot, because he was of the Enlightenment. In many ways, the ideas of the Enlightenment are still with us. The relationship between science, the arts and religion, gender politics, those big things. He was also a master of an uncertain narrative where we’re unsure which characters we can trust. Sounds familiar. It does sound familiar. And we’re in a world of fake news, Donald Trump and other populist leaders. And particularly in a time when journalism as a career is taking a huge knock, Diderot’s own struggle with this is very ‘of the moment’.

Is there a particular author who has inspired your career? Hermann Hesse is a deeply, deeply spiritual writer. I went into the arts in the first place around 30 years ago and I was always interested in the idea of transformation in ourselves as human beings. He’s sad, tragic, and always brilliant. He’s a writer I go back to, and read and reread.

Eight Songs for a Mad King Heather Straka’s art series Dissected Parlour is not in a gallery, but rather on the walls at Mod’s Hair in Merivale, Christchurch. She talks to ...